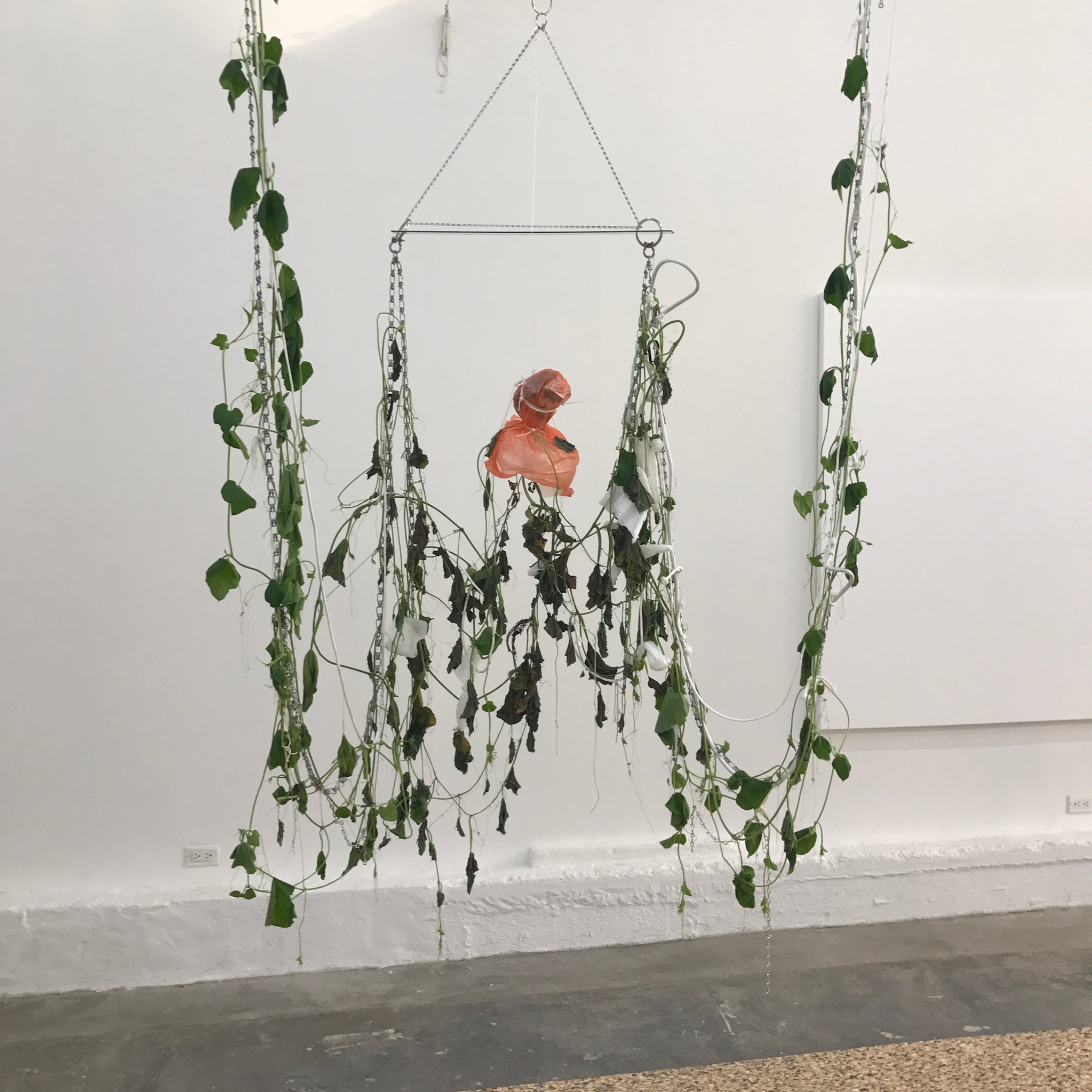 as a part of Inclinations, curated by Jae Cho at Spencer Brownstone

Diaries that track each vine and their transplanting. A tracking of the routine presence of watching them.

Bottles grown from seed, transplanted several times and trained to climb. Hanging in a shorter space than where they were grown, uprooted and roots uplifted.

What is spoken personally (embottled, bottled up) and what is shared openly.

A bottle’s open top is its horizon. The stopping access of the world. Gravity moves up rather than down. The terrain of a ghost trap. The view from the lobster. Building a ship in a bottle means building it underwater or at least already lost at sea. From a remove. It takes patience and care always at a remove. My nose always on the other side of glass. Patience, care, remove, fragility

Bottles are not as big as pots. Bottles entail routine. One day, one event opening or closing.

Being put in an effort to be preserved. Not just maintained in their growth but held to fit in an environment. How to freeze them or transplant them, wanting to hold onto them or to literally stop them, in the same way one stops a bottle, corks it. They share the form of a bottle. Vines work like liquid, moving up, filling up according to their container rather than fully determining their own strength by dint of their roots. Their roots are essentially along their trunk, a sort of inverted plant, where roots are high, and the horizon has been shifted to the top, like a perspective under water or from the perspective of a fly trapped in a bottle. Where they were grown.

Routine ghosts are the haunting of a habit (as in something that is supposed to be almost instinctual and subconscious, here coming forward), and our habitual encounter and looking over (or through) of the un-neat, untidy, the detritus of “punctual” activity, — in other words marginalized elements automatically dead. We make dead by caring and wanting to preserve things. Ghosts of the every day. Unnoticed things.

To go back to the first, in the vines is always a kind of ghost of a routine, watering, training, that has its repetition but no clear end, no “fruit.” The whole is defined by the absences as a result of care. What is not there, (the space that they were grown in, the soil and pots they grew from). Nature without nostalgia. Culpability of caring.

The calabash gourd (penguin is a varietal) is one of the first plants to be grown agriculturally not for it as food but as a tool. A bottle, a hollow, for drink, preserving, or music.